The New Independents Influence on the 2016 Presidential Election

In 2012, Maine correctly predicted the re-election of President Obama, which many pundits attributed to his ability to establish a winning coalition with, "two key, and expanding, constituencies: Hispanics and members of the Millennial Generation."

Now, as we look forward to the 2016 Presidential election, many are asking whether or not any of the candidates can retain this winning coalition. But, maybe they don't have to - so long as they can win over The New Independents.

The New Independents are the 50.2% of U.S. adults who are single (either never married or previously married), and even more impressive is that they have $567 billion in annual spending power (which, by the way, is more than the GDP of Sweden).

Beyond purchasing power, The New Independents also have massive political power. Other than Caucasians, no other demographic group within the United States holds a majority of the vote. Singles are a majority (and unlike Caucasians, they are a growing majority), and they are just as likely as their married counterparts to vote in the 2016 election.

So how might this group influence election results? Part of the answer lies in their political identification, and part lies in their attitudes toward public policy issues at the forefront of the agenda this election cycle. Given that nearly half of Singles do not strongly associate themselves with an established party, it becomes likely that how they vote is based on issues rather than candidates.

And this may spell further trouble for Republicans, as the political opinions of The New Independents tend to skew toward the more progressive end of the spectrum. For example, compared to the general population, Singles over-index for strongly agreeing with progressive views on same sex marriage, abortion, healthcare, and climate change.

But, one may argue, most Singles are clustered in large urban centers and those cities are in steadfastly blue states, so the voice of Singles is unlikely to have an impact in the less-urbanized swing states of Ohio, Florida, Pennsylvania, and Nevada. 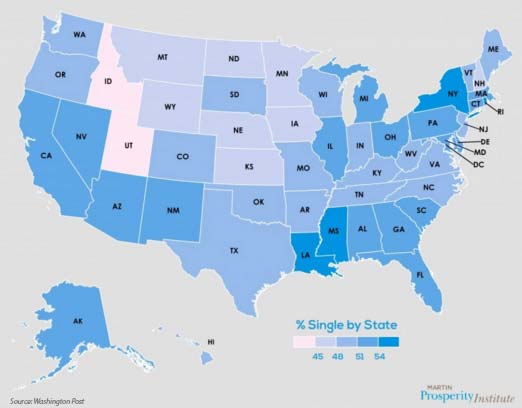 As of September 2014, there were 27 states which had a majority of their adult population composed of households of one, including key battleground states such as Ohio, Florida, Pennsylvania and Nevada.

So, if you don't feel like staying up past midnight for the election results, don't look to Maine. Ask a New Independent.

To learn more about this emerging segment download, Millions of Singles, Billions of Dollars: The Rise of the New Independents, which contains much more detail about the study C+R Research conducted with TPN on the spending power of Single adults.